SAN DIEGO, CA  —  Today, supporters of Proposition 15 called on elite and private country club owners in San Diego to pay their fair share in property taxes to fund our schools and communities. Country clubs are among the largest landowners in the region, but they pay some of the lowest commercial property taxes. In San Diego County, some of the most exclusive golf clubs pay pennies per square foot while many homeowners across the street pay 50 times as much.

Five of the oldest and biggest country clubs in the region — The Crosby Club, Del Mar Country Club, San Diego Country Club, La Jolla Country Club, and The Farms Golf Club — own more than 750 acres valued at more than $55 million dollars, and each one of them pays pennies per square foot in property taxes, a fraction of what homeowners and new small businesses pay throughout the county. Prop 15 will close the corporate tax loophole that allows these exclusive country clubs to get away with not paying their fair share, contributing to the chronic underfunding of the schools and communities that lay beyond their private picture-perfect lawns.

Thes elite country clubs in the county have used the loophole that Prop 15 seeks to close to avoid paying their fair share of property taxes for decades, which has depleted the revenue that funds our local schools, community colleges, and essential services like health clinics, firefighters, and services for seniors, foster youth, and domestic violence victims. Since the creation of the loophole in 1978, the most exclusive clubs have gone from charging hundreds of dollars to tens of thousands of dollars (and in some cases hundreds of thousands) for membership, while still paying the same property tax they did forty years ago, pocketing the profit. 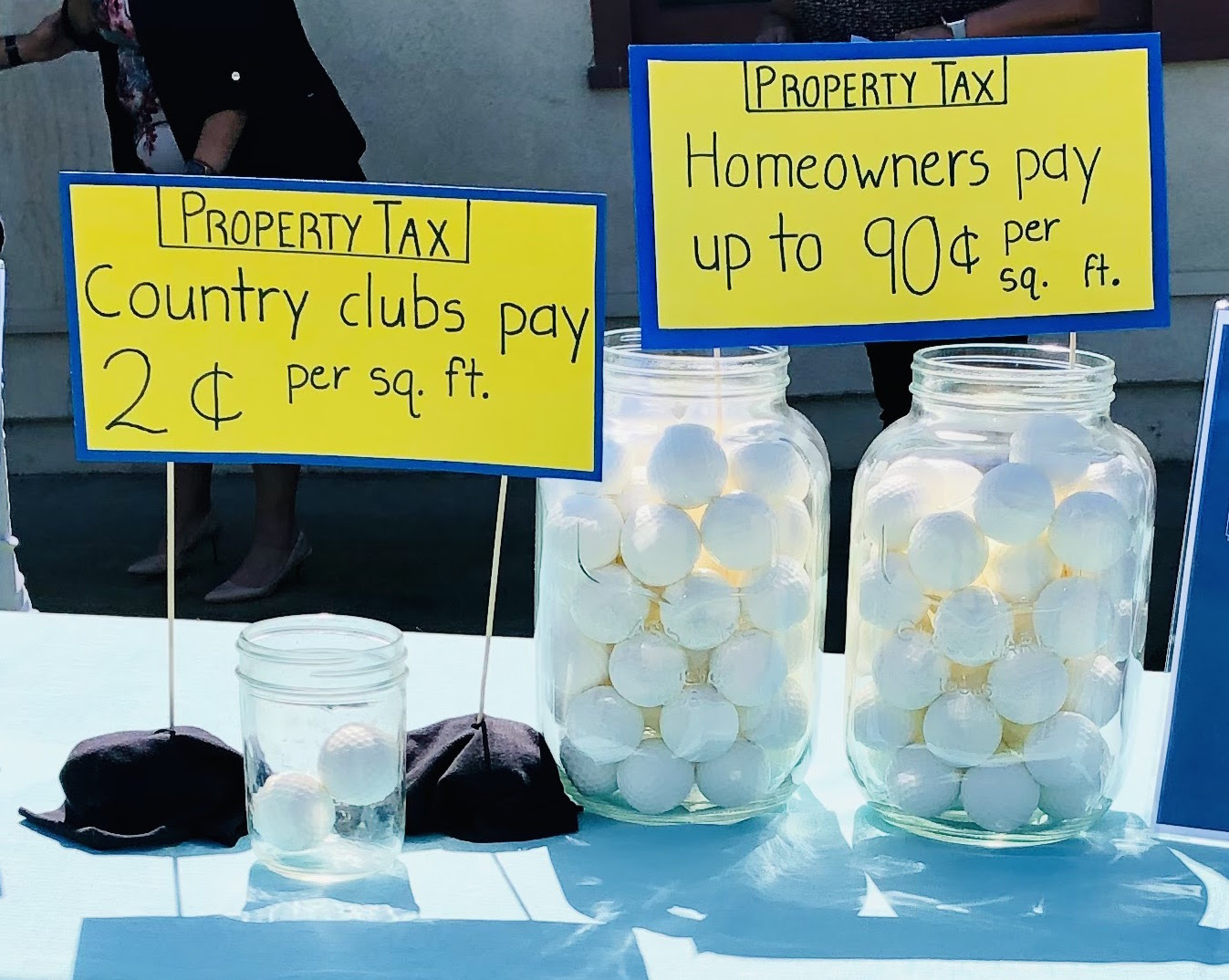 Golf balls on the right represent the tax burden placed on homeowners, versus two golf balls representing the 1978-level taxes the country clubs in our region pay as part of the tax loophole they abuse.

According to the county tax assessor, homeowners currently contribute 77% of the total property tax revenue, while country clubs and other large commercial and industrial property owners only contribute 21%. And while families and small businesses struggle in the midst of the pandemic, the largest country clubs in the county are getting millions of dollars in bailouts and corporations are getting billions. It’s time for them to pay their share.

“We call on country clubs to be a part of our communities, not separate from them, and do their part to support the schools, community colleges, and local services that help us all get ahead.”

“If homeowners can pay their fair share, why can’t elite country clubs — everyone should do their part. As a homeowner I want to encourage everyone to vote yes on Prop 15. It’s time to make these private clubs and other corporations who have not been paying their fair share do so now.”

“I’ve been an educator here in San Diego for 23 years. I've seen the resources for our students go on the decline. I’m horrified at the way that these wealthy country clubs and corporations make money off our communities without giving anything back. COVID-19 costs have decimated our school districts, which are funded by property taxes. The burden is unfairly placed on homeowners while these wealthy corporations contribute nothing.”

“Country clubs aren’t the only ones avoiding paying their fair share, but they have some of the largest properties and, given their troubled history, have a responsibility to contribute to the public institutions that foster equity and inclusion.”

Formed in 2016, Alliance San Diego Mobilization Fund (ASDMF) is a California non-profit public benefit corporation formed under IRS section 501(c)(4). ASDMF seeks to expand the opportunity for all San Diego residents, especially marginalized residents, to reach their full potential by increasing their participation in our democracy, our economy, and our society. To advance our mission, we are engaging in voter education and policy advocacy.